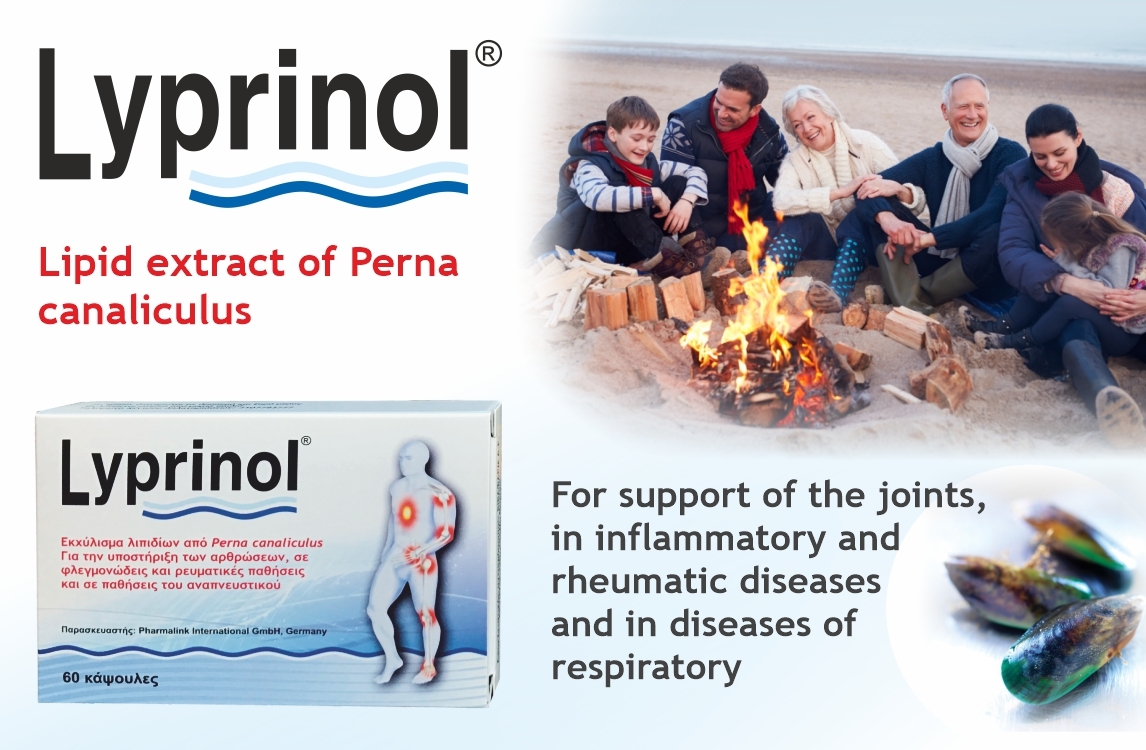 Information for health scientists only

Lyprinol® is a natural, safe and effective anti-inflammatory from polyunsaturated fatty acids.

It inhibits the enzymes COX-2 and 5-LOX naturally without any known side effects. See in detail in the video that follows.

Lyprinol is a stabilized marine lipid extract to support joints and respiratory health.

Each Lyprinol capsule contains 50mg of natural oil extract from New Zealand green mussel which has been stabilized by a special patented method. Modern studies have shown that it contains a rare combination of lipid groups and unique Omega-3 polyunsaturated fatty acids with particular benefits. It can be used for long periods to maintain the health of the joints and the respiratory system.

WHAT IS LYPRINOL®?
Lyprinol® is a safe, effective natural anti-inflammatory that is trusted and used successfully by thousands of people worldwide. It is a unique combination of omega 3 polyunsaturated fatty acids extracted by a patented process from New Zealand Green Lipped mussel (Perna Canaliculus). Lyprinol is the only product from Green Lipped mussel oil, supported by clinical and laboratory studies published in medical and scientific journals. No other mussel extract product is supported by such research.

HOW DOES LYPRINOL REDUCE INFLAMMATION?
Lyprinol® inhibits the enzymes COX-2 and 5-LOX naturally. See details in the video at the bottom of the page.

DOES LYPRINOL® HAVE ANY SIDE EFFECTS?
Lyprinol® has no known side effects.

WHAT IS THE RECOMMENDED DOSAGE?
The recommended dose for maximum results is (2) soft Lyprinol® capsules twice daily for the first 4 to 6 weeks and then reduced to a daily maintenance dose (2) soft Lyprinol capsules taken once daily, preferably after from lunch. FOR BETTER RESULTS IT IS IMPORTANT TO USE THE INITIAL DOSAGE FOR 4 - 6 WEEKS

HOW LONG DOES IT TAKE TO FEEL LYPRINOL® EFFECTS ON MY BODY?
Most people need a few weeks to notice the effects of Lyprinol® on their body. Some say they felt better after a few days, while others say it took 4-6 weeks before they could feel the difference. Whether it takes weeks or days for you to experience the effects of Lyprinol®, one thing is certain: It will only work if you take it regularly on a daily basis.
In very rare cases, some have reported an increase in their symptoms including pain during the initial period of use. If this happens, then the amount of capsules should be reduced until they feel better and then slowly increase the dose after 4 weeks. Most people who have had this problem have overcome it with a much better result than others.

WILL LYPRINOL® INTERACT WITH OTHER MEDICINES?
Lyprinol® is a 100% natural product and can not harm anyone or interact with any other medicines it uses.

CAN I TAKE LYPRINOL® IF I AM ALLERGIC IN SHELLFISH?
Yes, there is no protein in Lyprinol® that could cause allergic reactions. The patented (supercritical) extraction process (SFE) used to extract the oil from the mussels used in Lyprinol® isolates only the active substance from them.

IS LYPRINOL® SIMILAR TO OTHER GLM (GREEN LIPPED MUSSEL) PRODUCTS?
No. GLM lipids are extremely sensitive to oxidation. Only Lyprinol® has a specially patented process of stabilizing mussel processing and extracting the oil that protects the active substance.

WHAT ARE THE ADVANTAGES OF LYPRINOL® IN RELATION TO PRODUCTS CONTAINING GREEN LIPPED MUSE DUST?
Lyprinol® has many advantages over mussel powder such as:
• Mussel powder contains proteins that can cause allergic reactions in some people. Since Lyprinol® is an oil, all proteins have been removed.
• Lyprinol® is very concentrated, the dose required is much lower and the soft capsules are easier to swallow.
• Mussel powder contains sea salt which can be a problem for people who need to stay on a low salt diet. Lyprinol® does not contain salt.

IS LYPRINOL® FDA APPROVED (US DRUG AND FOOD DIRECTORATE)?
Lyprinol® does not belong to the class of medicines. Lyprinol® is a 100% natural organic product that does not require FDA approval. However, Lyprinol® meets and adapts to FDA requirements for dietary supplements.

HAS LYPRINOL® BEEN APPROVED AND SOLD IN OTHER COUNTRIES?
Yes, Lyprinol® is sold in many countries including the United Kingdom, Germany, France and other major European Union countries, as well as Australia and New Zealand.

IN WHICH CASES CAN LYPRINOL® BE TAKEN?
Lyprinol® can help reduce the inflammatory process in conditions such as:

CAN SOMEONE HEALTHY TAKE LYPRINOL® EVEN WITHOUT HAVING ANY KIND OF INFLAMMATION?
As omega-3 fatty acids are essential for the human diet they should be taken daily even if you do not suffer from inflammatory disorders. Children and pets can also take Lyprinol®. Omega fatty acids have also been shown to be effective for blood circulation, a healthy heart, and brain function.

WHAT ARE OMEGA-3 & OMEGA-6 FATTY ACIDS?
Two main categories of PUFAs (polyunsaturated fatty acids) that have been of great interest to the human diet are Omega-6 and Omega 3 PUFAs. Omega 6 PUFAs are included in all vegetable oils. Some of the Omega-6s are considered more valuable, such as the GLA (gamma linolenic acid, 18: 3) found in (primrose) evening primrose and borange oils. Omega 3 is found to a limited extent in some plants but is found in all fish and shellfish. For example, canola and flaxseed oils contain alpha linolenic acid (18: 3). The omega 3 PUFAs found in fish are thought to be five to ten times more potent in biological action than those found in plants.

IS THERE ANY ONEGA-3 DEFICIENCY IN UNITED STATES?
Many scientists and government agencies around the world agree that the average Western diet is very high in another group of fatty acids, namely oils in Omega-6. As a result, our cell membranes are unusually rich in precursors associated with inflammatory processes, which can lead to arthritis, asthma, and psoriasis, to name a few. Scientific research demonstrates the need for the American public to reduce their omega-6s intake and increase their omega-3 intake to improve their health. What has really been proposed in the scientific literature is to include in government policy, the establishment of rules for these essential fatty acids.

HOW DOES OMEGA-3 FATTY ACIDS BENEFIT THE BODY?
Research has shown that omega-3s are important for the joints, respiratory, cardiovascular and normal cholesterol levels, HDL levels and triglycerides. The US Food and Drug Administration (FDA) has now approved the use of the statement: "The scientific evidence that omega-3 fatty acids can reduce the risk of coronary heart disease is for guidance only, not mandatory."
Omega-3s help women during their menstrual cycle as well as support memory. There have actually been over 5 studies that have shown that people with depression have lower levels of omega-3s in their blood than normal people. Omega-3s support blood circulation in the body, the immune system, the gastrointestinal tract and the kidneys.

WHY SHOULD ONE TAKE LYPRINOL® INSTEAD OF COD OR SALMON LIVER OIL?
Lyprinol® is a unique combination of 30 different fatty acids that is a mixture of saturated and polyunsaturated fatty acids.
Total EPA 4 (eicosapentaenoic acid) and DHA (docosahexaenoic acid) represent only 20% of total fatty acids. Contains in balance marine sterols and other fatty acids such as ETA and OTA. This combination acts as an anti-arachidonic acid (AA) inhibitor. The ability to inhibit AA is due to the chemical affinity of the Lyprinol® combination for the inhibition of AA which is one of the main precursors for inflammation. This action does not occur with large doses of EPA and DHA.

WHAT IS INFLAMMATION?
The inflammatory process is highly complex and is defined as the body's response to physical, chemical, or biological damage, which in a normal healthy person results in local reduction of the problem and regeneration or repair of damaged tissue. The inflammatory process occurs as a natural reaction of the immune system to infection or injury. Inflammation manifests the effects of the healing process, and is caused by the rapid growth of white blood cells (t-cells, β-cells, etc.), which are transported to the injured or infected area in order to destroy the foreign cells. The symptoms of inflammation, fever, redness, swelling and pain, are the direct results of this increased concentration of blood cells.
In every healthy person there is a controlled process of inflammation (ie white blood cells automatically recognize when their target is complete). However, in cases of rheumatoid arthritis, the immune response becomes irregular, unrestrained, and as white blood cells begin to target the body's tissues, the inflammation becomes acute, and out of control.
In some cases, the inflammatory process itself can cause damage and injury. A prime example is that of osteoarthritis, an inflammatory disease that can affect all joints in the human body but primarily affects the most commonly used joints, legs, knees, arms, hips, shoulders, elbows and back, which usually have the effects of many years of work and sometimes injuries.
Autoimmune disease, rheumatoid arthritis, where the body attacks itself, and hypersensitive conditions leading to asthma and anaphylactic shock are examples of uncontrolled inflammatory responses. The initiation and control of the inflammatory process are complex and are controlled by a number of biomolecular mechanisms. An important mechanism before inflammation is closely linked to the cell membrane that binds arachidonic acid, which is converted to other compounds in the body, which are powerful substances that support inflammation.

WHAT ARE THE SYMPTOMS OF INFLAMMATION?
Inflammation is characterized by:
• Redness
Swollen joint that is warm to the touch
• Joint pain
• Stiffness of the joint
• Loss of joint function

Often, only a few of these symptoms are present. Inflammation can also be associated with general "flu-like" symptoms, including:
• Fever
• Colds
• Fatigue / loss of energy
• Headaches
• Loss of appetite
• Muscle stiffness

WHAT CAUSES INFLAMMATION AND WHAT ARE THE RESULTS?
When an inflammation forms, the body releases chemicals from the body's white blood cells into the blood or affected tissues to protect your body from foreign substances. This release of chemicals increases blood flow to the site of injury or infection, and can lead to redness and fever. Some of the chemicals cause fluid to diffuse into the surrounding tissues, resulting in swelling. This protective process can irritate the nerves and cause pain. The increased number of cells and substances that cause inflammation inside the joint cause: irritation, cartilage destruction, and swelling of the joint.

HOW IS DISEASE DIAGNOSIS MADE?
The diagnosis of inflammatory diseases is made after careful evaluation of the following:
• Complete medical history and physical examination
• The location of aching joints
• Presence of joint stiffness in the morning
• Evaluation of other symptoms
• X-ray and other test results

CAN INFLAMMATION AFFECT THE INTERNAL ORGANS?
Yes. Inflammation can affect organs as part of an autoimmune disorder. The form of the symptoms depends on which organs are affected. For example:

THE POWER OF LYPRINOL®
If you suffer from pain due to arthritis, old football injuries, another sport or car accident, or for any other reason - try Lyprinol®. You have nothing to lose but the pain that afflicts you!
Our promise is to provide you with the purest and most powerful Omega 3 on the planet. Lyprinol® is used by doctors and is highly recommended to their patients.
Lyprinol® acts at the cellular level. After a few days or a few weeks Lyprinol® at the recommended dose will penetrate all your 100 trillion cells and you will see and feel the difference. Reduced pain, more energy and better heart health.